Amateur Dramatics: the high ideals of Wycombe’s Wanderers who refused to go pro

In 1877, reigning FA Cup champions Wanderers FC – midway through a three-year winning streak that took their total number of Cup titles to five – came to the Buckinghamshire town of High Wycombe for an exhibition match. Their visit must have left quite an impression. Seven years later, when a group of young men from the town formed their own football club, they adopted the name ‘Wanderers’ in honour of these prestigious guests.FN1

The founders of North Town Wanderers (as they were called until 1887[1] ) worked in High Wycombe’s famous furniture trade. These men must have enjoyed 1877 a great deal because in addition to Wanderers FC, the town was also visited by none other than Queen Victoria, making a rare public appearance in her widowhood to honour the birthplace of the ‘Windsor’ chair.FN2 This industry would provide the club’s ‘Chairboys’ nickname.

Like their idols Wanderers FC (who had disbanded by the time Wycombe started playing competitive matches), the furniture-makers aspired to the ‘gentleman amateur’ ideal. Although essentially working class tradesmen, they associated themselves with Buckinghamshire nobility by making their crest of a chained swan that featured in local heraldry.[2] Wycombe Wanderers began competitive life as members of the Southern Football League from 1896 to 1908. By the end of this period, professionalism had insidiously entered the Southern League, just as it had the ‘Northern’ Football League in the 1880s (see Preston North End), prompting proud Wycombe to resign their membership on principle. They competed in several amateur leagues over the coming years, winning the London-area Spartan League in 1919 and eventually joining the Isthmian League for southern teams.

Wycombe Wanderers would remain staunchly amateur until 1974 and only adopted semi-professional status that year because the FA announced it would no longer recognise amateur football. Playing in the combined blues of Oxford and Cambridge universities, in the leafy surrounds of their Loakes Park ground – owned by Lord Carrington, no less – the club were a time capsule of a bygone era, the days when football was a hearty pastime of the upper and middle classes. Such wistful idealism comes at a price, though, and the club had only brief periods of competitiveness. 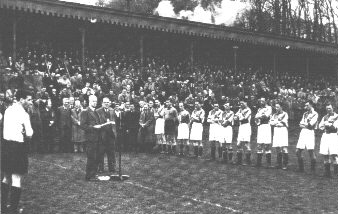 ‘If future generations obtain the same enjoyment out of Loakes Park as it has given me in the past, then this gift will have been worthwhile.’ – Frank Adams upon gifting the ground’s freehold to the club, 1947

They won the FA Amateur Cup for the first and only time in 1931, beating Hayes 2-1 in the final at Arsenal’s Highbury ground. The following season they qualified for the FA Cup first round proper, taking Gillingham to a replay. They wouldn’t become Isthmian League champions until 1955/56, but retained their title the following year. This was under the management of former Man City defender Sid Cann who oversaw a nine-year period during which Wanderers were regularly challenging at the top of the table. They also reached the FA Amateur Cup final in 1957, losing 3-1 to Bishop Auckland in their first ever game at Wembley, and began to grace the FA Cup proper on a regular basis, reaching the second round in 1959/60 with a 4-2 win over fellow non-League side Wisbech Town before being eliminated by Watford.[3]

The 1970s saw another period of success. Wanderers won the Isthmian League four times in five yearsFN3 and had their best FA Cup run to date in 1974/75, taking Middlesbrough (seventh in Division One [1] that season) to a third-round reply after a spirited 0-0 draw at Loakes Park that was broadcast live on LWT. In the rematch at Ayresome Park, the professional side only progressed to the next round with a last-minute goal.

However, the death knell was already sounding for Wycombe’s Corinthian spirit. Other non-League sides began to poach their undoubtedly talented players and, in November 1975, manager Brian Lee resigned after seven years in charge. The club were well supported home and away, but they declined to follow long-term rivals such as Enfield and Wimbledon into the nascent Alliance Premier League (founded 1979), England’s first truly nationwide competition for non-Football League clubs,FN4 because of concerns about travel costs.

Such insular attitudes inevitably had to be rethought sooner or later. Wanderers were Isthmian champions again in 1983, but crowd numbers were falling. In 1985, after finishing third in the Isthmian Premier Division, entitling them to promotion, they finally deigned to enter the Alliance Premier League (or Gola League as it was known that year – how vulgar!). Relegation in their first season allowed them to win their eighth Isthmian title in 1986/87, before the club began their belated journey into the modern era.

In February 1990 they appointed the thinking man’s footballer Martin O’Neill as manager, ending a promising career in insurance for the Northern Irishman. That summer the Wanderers did some actual wandering and left Loakes Park after 95 years. The land was sold to neighbouring Wycombe General Hospital and a new stadium was built on the outskirts of town. There were still trees looming behind the South Stand, but the ground was reached via an industrial estate[4] – a poetic reminder for Wycombe supporters that it was no longer the Victorian age. The stadium was named Adams Park in deserved tribute to Frank Adams, a former club captain who, in 1947, had purchased the Loakes Park freehold from Lord Carrington and gifted it to the football club.[5] FN5

Wycombe’s progress under O’Neill was staggering. Finally resembling a professional football club, they won the Football Conference (as the Alliance was now known) in 1992/93, also claiming the FA Trophy (created in 1969 for semi-pro sides) in the process. This meant they entered the Football League for the first time. Wanderers immediately finished fourth in Division Three [4] to qualify for the play-offs and they defeated Preston at Wembley to earn promotion to the third tier, a level they would compete at for the next decade.

They might even have reached Division One [2] in 1994/95 but for the chaos done to the promotion/relegation system following the foundation of the Premier League. That season there was only one automatic promotion spot while second through fifth went into the play-offs. Wycombe finished sixth. That summer the messianic O’Neill departed for an ill-fated spell at Norwich before he continued to work his miracles at Leicester City.

O’Neill left Wycombe very much a Football League side, but professionalism has been a mixed blessing. I’ve been somewhat mocking of the various club administrators who collectively seemed to take a century longer than most clubs to start actually paying players. However, the two Isthmian League rivals I mentioned above as having made the step up earlier than Wycombe – Enfield and Wimbledon – have both gone out of existence since then, so perhaps the self-styled Wanderers were right to cling on to their Victorian values for as long as they did.

In 2009 the club went into private ownership for the first time, with businessman Steve Hayes buying out the club members’ shares for £3 million. With plans for a new stadium on and off the table, a fall into League Two [4] and the club put under a transfer embargo, it was a bitter taste of the drama that comes with modern football. In February 2012 Hayes was arrested on computer hacking charges (which were dropped 43 months later[6] ) and that summer he handed control of the club to a supporters’ trust in an amicable deal.[7] FN6

Under the Trust, Wanderers narrowly avoided relegation in 2013/14 but have since stabilised in the league. Still fan-owned, the struggle to stabilise the finances is ongoing,[8] but at time of going to press they have no plans to relieve the burden by returning to amateurism.